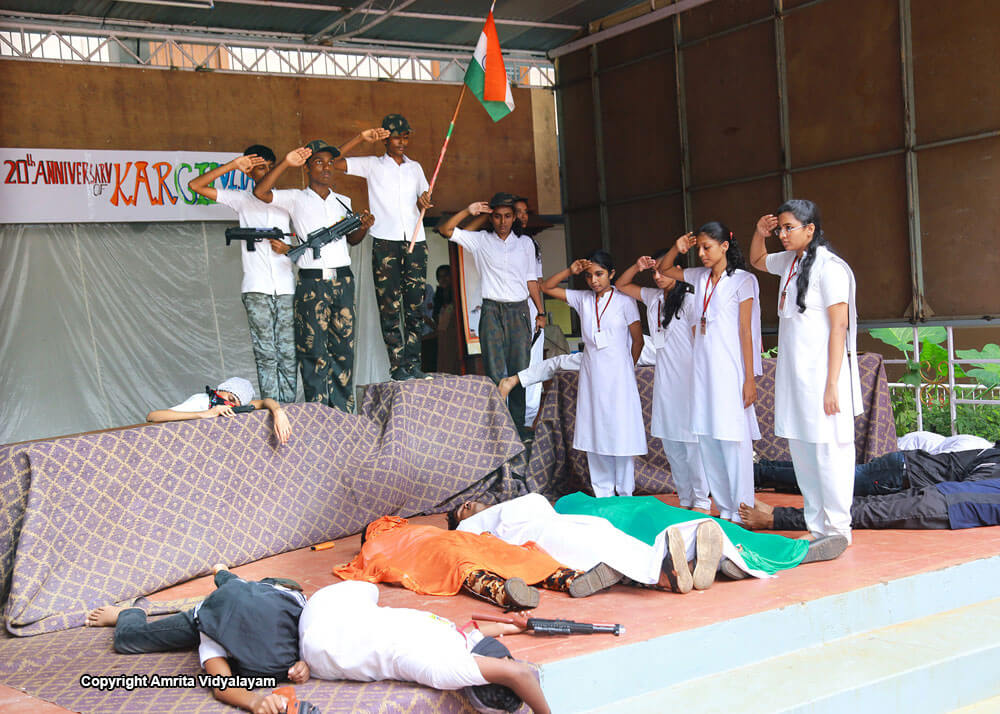 Kargil Vijay Diwas is observed on July 26th to commemorate India’s success in Operation Vijay and victory over Pakistan. On this day, the Prime Minister of the nation pays homage to the brave soldiers at Amar Javan Jyothi.

On July 29, 2019, a number of activities were organized at Amrita Vidyalayam, Kuthuparamba to observe the 20th anniversary of Kargil Vijay Diwas.

The programme started with breath-taking speeches by two of our students which inspired the entire school, raising their patriotic spirits to the highest level. This was followed by a patriotic song by our students praising Mother Earth. The last item of the on-stage programme was a skit by students keeping the theme of Kargil alive. It quite realistically depicted the courage shown by our soldiers on the battlefield in order to save our country. The touching and motivating skit made the entire school reverberate with the slogan ‘Vande Matharam’.

As per the directions of MHRD regarding reducing the weight of school bags, Amrita Vidyalayam schools are restricting the subjects for Standards 1 and 2 to English, Mathematics, and second and third languages. Standards 3 to 5 will have EVS in addition to the above subjects.

We have also implemented “No Homework Policy” for Std. I and Std. II

Your application has been successfully submitted. Thank you for applying to Amrita Vidyalayam, Kuthuparamba.

Our administrative executive will contact you back at the earliest.